Team USA would not be denied their fourth straight win at the FIBA Basketball World Cup 2019 after beating Greece, 69-53, in a low-scoring Second Round encounter at the Shenzhen Bay Sports Center. Greek superstar Giannis Antetokounmpo put up big numbers in this game, but it was the stifling defense of coach Gregg Popovich's squad that ultimately proved to be the difference. The Greeks were held to their lowest scoring output of the World Cup so far, and their prospects of advancing to the Quarter-Finals suffered because of it. Team USA had six players score 8 points or more, led by Kemba Walker's 15 points, while Antetokounmpo paced Hellas with a 15-point, 13-rebound double-double and Kostas Sloukas added 13 points. 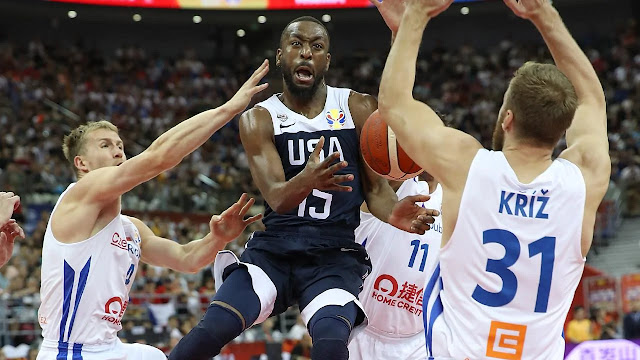 It was a tight game to start, with Team USA leading by just 2 points after the first 10 minutes, but the Americans outscored the Greeks 35-19 in the middle two periods to break the game open. Coach Thanasis Skourtopoulos's team would be able to trim the deficit to as low as 11 in the final quarter, but they were never able to mount a big enough run to seriously threaten the still unbeaten Americans. "It was a tough game. We congratulate the US team. They have too much intensity for 40 minutes. We tried to stop them with zone and matchup defense, but they are just too much. We missed a lot even with free-throws, too, so it's very difficult to beat a team like the US when we play like this." - Greece head coach Thanasis Skourtopoulos. "I think we tried to play our game, but we let them play their playing style. We let them have easy shots, and we lost offensive rebounds to them."
at September 07, 2019