When something serious is about to go down in the popular franchise One Piece chapter 955, creator Eiichiro Oda lets you know in the most dramatic way possible: by Beast Pirates And Bigmom Pirates Alliance. Seven days before the raid of Onigashima, Kawamatsu succeeded in obtaining a large number of swords their forces can use for the battle. Along with this, Zoro finally agrees to return the Shusui to the people of Wano in exchange of Enma. Princess Hiyori insisted on the return of the sword as they considered it a relic to the country. She expressed that the country of Wano has been in much tribulation ever since the sword was taken from them, and hopes that the return of Shusui will bring good fortune once again to the country. 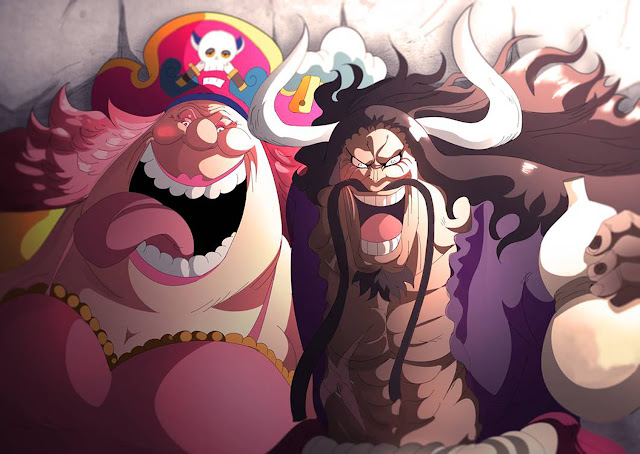 Zoro probably agrees because of Hiyori’s tale that the Enma – her own father’s sword – was the only blade to ever injure Kaido in battle. And knowing Zoro’s interest in legendary swords, he would probably want to test if the tales were true. The last time we saw Law and Hawkins’ confrontation, Law was at a great disadvantage as Hawkins took upon himself the lives of Law’s crewmen using the Stra-straw fruit. This means that Law would have to kill three of his subordinates first before he can get through Hawkins.

After revealing Hawkins’ real purpose of joining Kaido, Law decided to help him as he must have felt that Hawkins also holds grudge against the Emperor. After suffering an almost immediate defeat against a battle with Kaido, Luffy determined to make himself stronger with whatever little time he has left before the raid. While a prisoner in Udon, he learned how to use Ryuo, an advanced form of armament haki he once saw Rayleigh use during their training in Rusukaina. He then learned the principle of Ryuo from yakuza boss Hyogoro, under whose supervision he trains. His training includes punching a huge, thick slab of metal using Ryuo. Being almost helpless against Big Mom and Kaido, he must have realized by now that he has to be much stronger if he wants to win the battle against the Emperors. On the other side of the Island, Kinemon gives instructions to make certain changes in the picture puzzle they distributed to their allies, signifying a change in their meeting place. Kinemon assures that changing their meeting place will nearly guarantee that their raid won’t be stopped by their enemies. Near the end of the chapter, we saw Apoo arriving at Wano with a band of curious creatures called ‘numbers’. Kaido seems to be in shock hearing about this as he was not expecting them at all. This gives us an idea that Apoo might have some other plans in play that might give another twist in the plot. Probably the highlight of chapter 954, Big Mom and Kaido’s unforeseen alliance shook the whole One Piece fandom. Their alliance is based on their common goal to take over the world and a common hatred towards Strawhat. With this, we might see the appearance of the rest of the Big Mom pirates already in Wano on the next chapter. More epic events and revelations are highly anticipated in the next chapter of One Piece. Chapter 955 of One piece will officially return after a week and is expected to be released of September 16th in the weekly Shonen Jump issue.
at September 05, 2019

Email ThisBlogThis!Share to TwitterShare to FacebookShare to Pinterest
Labels: manga, one piece, one piece theory