Spain and Serbia booked their spots in the quarter-finals of the FIBA World Cup on Friday. Spain overcame Italy 67-60 and Serbia thrashed Puerto Rico 90-47 as they both guaranteed qualification from Group J. The two nations will battle it out for top spot when they meet in a mouth-watering clash in Wuhan on Sunday. Poland and Argentina also advanced with victories over Russia and Venezuela respectively. Hosts China scored a 77-73 win over South Korea in the classification round, while there were also triumphs for Nigeria, Iran and Tunisia. Spain were trailing 56-52 with four minutes to play against Italy, but Ricky Rubio helped lead a 10-0 run as Italy were put to the sword. The Phoenix Suns guard finished with 15 points, two assists and two steals, though he recorded seven turnovers – a joint-high for him in a World Cup game. Juancho Hernangomez had a game-high 16 points as Italy came up short and saw their hopes of reaching the last eight go up in smoke. Marc Gasol had just two points and four rebounds in his 27 minutes on the floor. A fourth win on the trot always looked likely for Serbia, who opened the scoring and never trailed against Puerto Rico. Five Serbia players reached double figures in points, while the towering Boban Marjanovic went seven-of-eight from the field for 16 points. 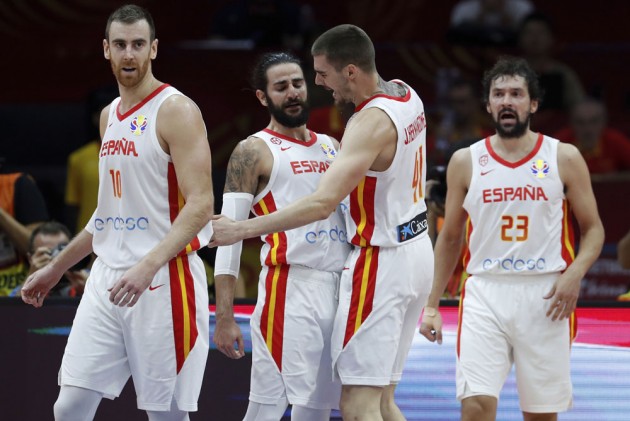 The European side out-rebounded their opponents 48-26 and used all 12 of their players in a routine victory. Nikola Jokic claimed a double-double with 14 points and 10 rebounds. Spain, ranked 2nd in the world behind world and Olympic champions the United States, was a different proposition for most of the 3rd quarter, but saw its initial decent advantage narrowed to just two points going into the 4th. The Italians, ranked 13th, were the underdogs but they refused to lie down and tied the game at 50-50 with a lay-up by Marco Belinelli of NBA team San Antonio Spurs. Italy streaked into a four-point lead with 4 minutes left, as the pressure cranked up another notch. But Spain and Ricky Rubio were not done, the Phoenix Suns guard getting the freedom of the court to edge ahead by two points once more. The 28-year-old was increasingly influential when he was needed most. He made two unerring free throws for a precious 60-56 lead, part of a game-winning 10-0 run for the Spaniards in the closing stages. Spain coach Scariolo pointedly refused to answer any questions about the match with Serbia. Jokic had 14 points and 10 rebounds, and made a sublime laser pass to cut open the Puerto Rico defense, as Serbia began the second-round group phase much as they finished the first. Sacramento Kings forward Nemanja Bjelica also impressed once more, drilling a leading 18 points. World and Olympic silver medalists Serbia has been in devastating form, comfortably winning all 4 matches in China and claiming the unofficial title of favorites from holders the United States. Denver Nuggets All-Star Nikola Jokic pulled the strings as formidable Serbia demolished Puerto Rico, 90-47, to likewise advance. Spain's low-scoring victory later in the day was enough to send the impressive Serbs through but the two countries will still play on Sunday in a mouthwatering match-up for supremacy of the group.
at September 07, 2019