Emboldened Australia closes on another first at Fiba World Cup

Now the Boomers are eyeing another first, having never gone beyond the quarter-finals in 11 previous World Cup appearances. A historic win over the United States, then three victories in a row at the World Cup in China to top the “Group of Death” — Australian basketball is setting new landmarks for itself. “We speak about it a lot: in international basketball, you need the size, you need the beef, there’s big men playing this game,” said coach Andrej Lemanis after his team beat European heavyweights Lithuania 87-82 in a gritty encounter in Dongguan. Australia not only survived the “Group of Death” also including Canada and Senegal, but they also topped it. The hard-earned victory on Thursday — the game was tied with just under two minutes left — made it three wins in a row to start their World Cup, a first for the Boomers. 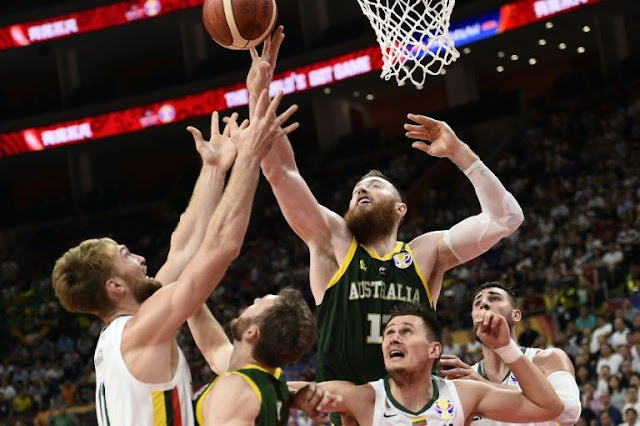 Putting the gloss on the evening, defeat for neighbors New Zealand against a Giannis Antetokounmpo-inspired Greece propelled Australia into the Tokyo 2020 Olympics as the best team in Oceania. They will be favorites to triumph over the Dominicans, who have the joint-shortest roster at the 32-team World Cup and were well-beaten 90-56 by France on Thursday. On Monday, with the quarter-finals in sight, Australia will face their toughest task yet in the form of France, who finished third at the 2014 World Cup. Next, San Antonio Spurs guard Patty Mills and the rest of the Boomers play surprise-package the Dominican Republic on Saturday in the second round. They are missing a couple of big players in Philadelphia 76er Jonah Bolden and his teammate Ben Simmons. But their roster still has a slew of NBA standouts and in the lead-up to the competition they ended the USA’s run of 78 consecutive wins in major competitions and exhibition games. But rather than being cowed by increasing expectations, the likes of Mills, the Utah Jazz’s Joe Ingles and seasoned veteran Andrew Bogut have flourished. The 98-94 victory in Melbourne was the Boomers’ first victory against the world and Olympic champions.
at September 07, 2019