Patch 7.22g is a few buffs and a lot of nerfs based on what was seen at TI9. The three heroes who weren’t picked at TI9 – Clockwerk, Keeper of the Light and Ursa have received new ammo to flex their muscles. The heroes that made the headlines in Shanghai have been nerfed to ensure we don’t get the same meta once again when the competetive season begins. The International 2019 ended two weeks ago. The next big patch won’t be released until after the first Major of the new season, which will be sometime in November. But till then, to mix things up for the start of the 2019-2020 DPC season, the good folks at Valve have released a small patch in the form of 7.22g. Alchemist, Chen and Enchantress were the biggest culprits and they have been dealt with accordingly.The interesting change is the one that has been made to Io. OG popularized the carry Io at TI9 and it seems the Wisp will now be moving back to a support role after 7.22g. Having the +75 Spirits Hero Damage talent at level 15 was very important for a position 1 Io. With the talent being pushed to level 20, by the time Io comes online as a carry, it will be a bit too late. However, a +90 GPM talent at level 10 is kind of a buff for support Io.

Besides heroes and items, the basic neutral bounties have been reduced by 5%, making jungling a little less fruitful. The changes are small but enough to stir up the meta. The qualifiers for the first set of Major and Minor will begin towards the end of Septermber, which is when we will get to see Dota 2 patch 7.22g in action! 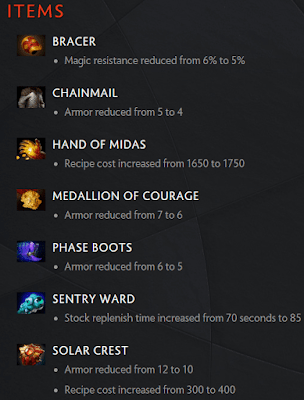 Items have only been nerfed in 7.22g and no item has received a buff. Like heroes, the list of items with that have gotten nerfed are the ones that were used a lot at TI9. Hand of Midas, after numerous nerfs, was still very popular with strength carries at TI9 and it sees another nerf coming its way. Considering the fact that Phase Boots have submerged Power Treads in the depths of the nether realms, it is suprising to see just a minor nerf for Phase Boots.
at September 07, 2019