Yeo Jia Min watched the flying shuttlecocks at the OCBC Arena as she pondered the questions asked in this interview, as though looking to the court for answers. She is a woman of few words, but her achievements on the badminton court have so far done the talking for her and the court is where she has found confidence. This confidence led to her remarkable quarter-final run at last week's BWF World Championships, during which she upset world No. 1 Akane Yamaguchi in the second round. It is in her trademark unassuming tone that Yeo says: "Even before I played or won, I already had confidence in myself, so I think (this result) gives me more motivation to train harder." A picture of Yeo's celebration after her victory over Yamaguchi shows the Singaporean kneeling on court and pumping both fists, her eyes shut as she exclaims in triumph. It is a picture that captures the ferocity with which the soft-spoken Yeo competes, one that surprises even her friends. Smiling as she described how some of her friends have made memes of her facial expressions, Yeo told The Straits Times: "(There's a photo) of my face looking 'chill', another with a focused expression, then there's one 'tiger-looking' face." The 20-year-old is the first Singapore woman to reach the singles quarter-final at the world championships but she is not revelling in her history-making accomplishment or her giant-killing feat. Instead, it is her 21-17, 21-11 quarter-final loss to 2013 world champion Ratchanok Intanon that has been on her mind. "I've been thinking of the match every day and how I can prepare and perform better. I think of that loss more than the wins," she said. Yeo, who was back in the gym the day after returning from Basel, Switzerland, believes she did not move as fast as she could against Ratchanok because she did not recover well from her previous match, a gruelling 72-minute battle with Vietnam's Vu Thi Trang. That is just one lesson among many others that she has learnt over the past year. A two-month professional stint with Danish badminton club Ab Aarhus from October to December last year has helped with her improvement on court, but her time in Denmark taught her more off the court. "I did everything on my own - go for training, cook, liaise with (the club) and with the Singapore Badminton Association, fly to and from competitions," said Yeo, who sought her mother's help in sending her recipes for Asian dishes. "I became more independent." Initial kitchen disasters did not faze her, though a sheepish expression crossed Yeo's face as she recounted: "There was once when I put noodles inside the pan without boiling them first, and they weren't cooking and I just left them there." 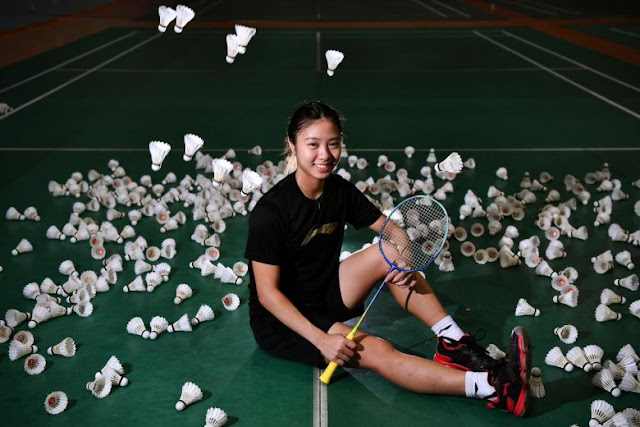 She fell in love with badminton at age seven, saying: "I like that there are so many (elements) to the game - mental, physical, tactical, technical. There are always things to work on and new challenges, and I like seeing progress in my game and in training. That's one of my motivations." Yeo had been tipped as a rising star even before she started training full-time in 2016, the year she won the first of her three BWF titles at the Vietnam Open. She was the first Singaporean to win the girls' Under-15 title at the Badminton Asia Junior Championships when she triumphed in 2013, and two years later she won the Under-17 title. She was also the junior world No. 1 in 2017, becoming the first from the Republic to top any of badminton's world rankings. Her achievement at the world championships has led to a career-high world ranking of No. 28 and though this may mean greater scrutiny and expectation, Yeo is not bothered. "I don't feel pressure, I just feel very blessed and honoured to be the one to make history," she said. She has drawn strength from her Christian faith when encountering setbacks like the injury that denied her a SEA Games debut in 2015 and the bout of gastric flu that ruled her out of the junior world championships that same year. Her goal when she was 14 was to win an Olympic medal and while that has not changed today, she is also seeking something bigger. "A lot of other players definitely have the same dream, which is to reach the highest level of competition at the Olympics. But more than that, I (also) want to have an influence, not just on Singaporeans, but on anyone I may come across," she explained. "I'm blessed to be able to play well and I think I should use this gift to my fullest and hopefully through my hard work, I can be a positive influence on people. "Of course you strive for excellence, but it's not everything." Still, she knows the areas of her game to improve to get closer to her goal: bettering her footwork for more stable and efficient movement, and honing her mental strength for greater focus. Yeo will book her ticket to the Games if she is within the top 38 in the BWF's Olympic rankings by April 28 next year. Unlike the world rankings, which take into account points from the top 10 competitions in the last 52 weeks, the Olympic listing is calculated using a player's 10 best tournaments in the qualifying period. She has no superstitions but at last month's Hyderabad Open, she started telling herself before walking out on court: "God is with me." She won the tournament and continued that ritual at the world championships. Off the court, she is working on mastering another language - Japanese this time, after already learning Korean. "I have many Japanese friends, and I find Japanese quite a nice language," said Yeo, who admires men's world No. 1 Kento Momota for his composure. "When you learn a language, you learn its culture and other things about the country, and I find it quite satisfying when you improve and can converse in the language." It is only when this reporter suggests that perhaps being fluent in Japanese would help if she qualifies for the Tokyo Olympic Games next year that Yeo bursts into laughter. "Maybe." Yeo may say little, but her feats have spoken volumes of the potential that is to be unleashed. Unlock all Premium articles and discover exclusive stories, in-depth analysis, award-winning multimedia content and more. Cancel anytime.
at August 31, 2019