The Sony Walkman TPS-L2 was released 40 years ago this summer, forever changing the way the world listened to music. It became arguably the most iconic brand in Sony’s history, with hundreds of devices bearing the name and continuing to be released today. To celebrate the Walkman’s legacy, Sony held an exhibit in Tokyo until this week called “Walkman in the Park.” The venue is Ginza Sony Park, a new public space that sits on the site of the iconic old Sony building that was recently demolished; another Sony building will be constructed here next year. 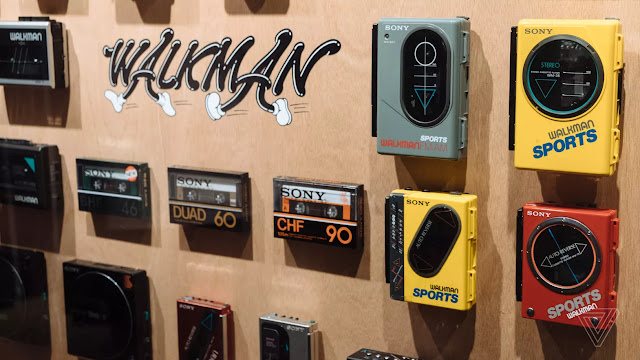 I’m no stranger to seeing a bunch of awesome old Sony products on display, but Walkman in the Park was a little different. The focus was on the experience of actually using the products and how they made you feel. You could listen to music on cassettes through cheap plastic headphones while reading quotes from people who used that Walkman at the time, and for a second feel like you were back in the ‘80s. And it started, of course, with a giant statue of a yellow Sports Walkman FM. The layout of the exhibit was inspired by a skate park. You could sit on a ramp and listen to early hip-hop on an original TPS-L2. The “Walkman Wall” featured almost every player imaginable. This installation connects a TPS-L2 to a newer digital Walkman and Sony’s excellent WH-1000XM3 noise-canceling headphones. To what end, I am not entirely sure.
at August 30, 2019