The world economy is facing challenging times, but Singaporeans will be able to weather the storm with the right tools and mindset, said Prime Minister Lee Hsien Loong at a dinner for his constituents on Saturday (Aug 24). "Last week, at the National Day Rally, I talked about the economy and how conditions are difficult because of uncertainties in the world and how that's affecting us," said PM Lee at the Teck Ghee National Day Celebration Dinner. "And how we will be able to respond, not just with stimulus, not just with relief packages, but also with training, with upgrading, and with transformation of companies." He emphasised the importance of workers learning new skills to stay relevant in a changing economy, and older workers continuing to receive new training. "These are things which will help companies... which will help all of us in Singapore weather economic difficulties and do well when conditions get better," he said. PM Lee reiterated other announcements made at the rally, such as enhancements to subsidies and reductions in fees for pre-school, which will help, in particular, low- and middle-income families with more than one child of that age. The Government will raise the monthly income ceiling for means-tested subsidies for pre-school education from $7,500 to $12,000, and increase the quantum of the subsidies, from next year. 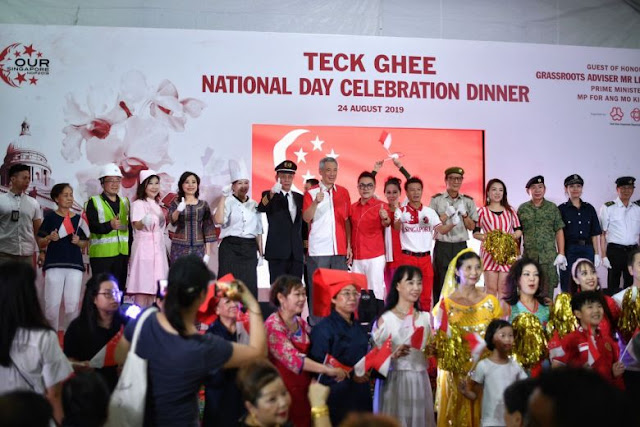 This will translate to 30,000 more households qualifying for financial help. In addition, government bursaries for educational institutions will be enhanced, said the prime minister. Those who will benefit are students at universities, polytechnics, the Institute of Technical Education, Nanyang Academy of Fine Arts (Nafa) and Lasalle College of the Arts. For example, government bursaries will be raised to cover 75 per cent of the fees for needy students across all six universities taking up general degrees, up from the 50 per cent currently. "What we are trying to do is to make sure that education is completely affordable," he said. "If you have the ability, you must go and take that education opportunity." Mr Lee was accompanied by his wife at the dinner. The celebration for Singapore's 54th birthday was attended by about 2,500 Teck Ghee residents and guests, including the prime minister's fellow grassroots advisers in Ang Mo Kio GRC. He also thanked the 80 grassroots leaders serving in Teck Ghee division who received the Long Service Award at the dinner, for their contributions. PM Lee noted that nine of them had served for more than 30 years. The event organised by Teck Ghee Grassroots Organisations also featured performances of National Day songs and the reciting of the National Pledge.
at August 31, 2019