Ominous Hurricane Dorian churn over the ocean in footage from ISS

Cameras affixed to the International Space Station filmed Hurricane Dorian brewing over the Atlantic Ocean on Thursday afternoon. National Hurricane Center forecasters expect the cyclone to hit Florida as a powerful Category 4 storm around Labor Day, ultimately packing some 130 mph winds. Over the next few days the storm will increasingly strengthen as it travels over some exceptionally warm waters (warm oceans fuel hurricanes). "No matter where you live along the U.S. southeast coast, and into the Gulf of Mexico, this is a storm to pay attention to," Brian Tang, an atmospheric scientist at the University of Albany, told Mashable on Wednesday. The hurricane will be helped along by a number of favorable (for a storm) atmospheric conditions. 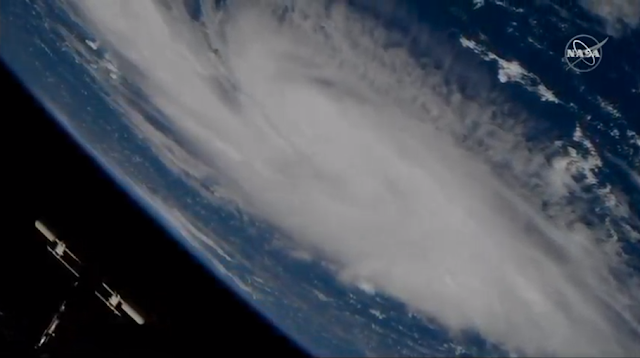 Namely, the storm is forecast to experience very little wind shear — opposing winds that weaken or rip apart hurricanes. There's little ahead that can stop the storm. "The shear environment is very weak," Jeff Weber, a meteorologist at the University Corporation for Atmospheric Research, explained Wednesday. "The storm is not being torn apart." Dorian arrives right on time, as peak hurricane season is just right around the corner. Tropical storm activity in the Atlantic usually ramps up after Labor Day. While there isn't a trend of more hurricanes forming in the Atlantic Ocean, there is evidence that hurricanes are growing stronger, and hurricane scientists expect this trend to continue in the coming decades. Dorian is forecast to pass over "very warm" surface waters off The Bahamas, noted Weber. This will likely amplify the storm. Warm waters can, and have, supercharged recent, major hurricanes. Research has shown remarkably warm waters have outweighed other factors in allowing recent storms to intensify into powerful cyclones. What's more, the overall oceans — which absorb more than 90 percent of the heat generated by human activities — are now continually, relentlessly warming.
at August 30, 2019