Medvedev embraces boos to reach last 16 at US Open, pain-free Djokovic joins him

Russian fifth seed Daniil Medvedev overcame a hostile crowd to secure a 7-6 (7-1), 4-6, 7-6 (9-7), 6-4 win over Spaniard Feliciano Lopez in a tension-filled clash on Friday (Aug 30) and book a spot in the last 16 of the US Open. Medvedev, who was heartily booed by the crowd inside Louis Armstrong Stadium at every opportunity after giving them the middle finger, relied on his powerful serve to put away Lopez and keep alive his hopes for a maiden Grand Slam tennis title. In another late match, reigning champion Novak Djokovic said he felt "almost pain free" as he strolled into the round of 16 with a 6-3, 6-4, 6-2 victory over Denis Kudla. The Serb struggled with a left shoulder injury in Wednesday's second-round win, but the top seed looked far more at ease against the 111th-ranked American as he advanced to a showdown with 2016 champion Stan Wawrinka. "I managed to play almost pain free. That's a big improvement from last match," the world No. 1 said. "Obviously I didn't know how my body would react and I'm glad to just finish the match tonight. I'm not going to go into medical details, but it was definitely bothering me the last couple weeks." He added: "I didn't practise yesterday. I just wanted to give myself time and do everything possible to recover." Meanwhile, Medvedev, playing for the second consecutive day after rain wiped out a slew of Wednesday matches, later told the crowd that their negative energy is what carried him to victory. "The energy you are giving me right now I think it will be enough for my next (four) matches. The more you do this the more I will win for you. Thank you," he said in his on-court interview through a chorus of boos. "I want all of you to know when you are asleep tonight I won because of you." The crowd turned on Medvedev in the first set when he angrily snatched a towel from a ballman's hands. Medvedev got an unsportsmanlike conduct code violation for the incident and when it was announced, the 23-year-old tossed his racquet towards the centre of the court before telling the umpire he did not belong in the chair. 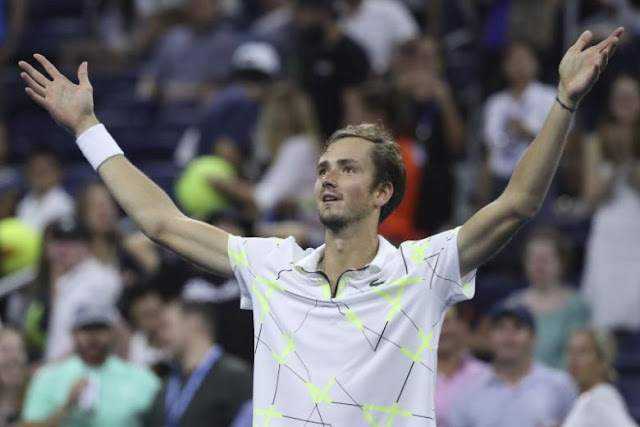 The crowd resumed their booing of Medvedev and as he walked back to his chair, he decided to hold up his middle finger close to the side of his head. When Medvedev's gesture was shown on the replay screen, the crowd showered him with boos and the umpire also gave him a talking-to. "I cannot give you a code because of what I saw on the screen. I have to see it myself," chair umpire Damien Dumusois told Medvedev. From there, the crowd were firmly behind Lopez and used every opportunity they could to boo Medvedev, including every time he double faulted or missed a routine shot. "I paid for it the whole match but the crowd was electric," he told a small group of reporters when asked about the inspiration he drew from the crowd. "Even the bad energy I needed to turn it into good energy and that's why I won." The Russian said he talked to Lopez at the net and to the Spaniard's coach, Jose Clavet, in the locker room after that match to assure them his actions were not against them and, according to him, both understood. Medvedev also said he was not sure whether the New York crowds would continue their booing for his next match but did say he does not expect to behave the same when he takes the court on Saturday. "I am working on myself and hopefully I will be better next time," he said. Medvedev arrived at the year's final Grand Slam with more confidence than ever after reaching the final in US Open tune-up events in Washington and Montreal before securing the biggest title of his career in Cincinnati 12 days ago. The Russian is also considered one of the favourites to keep one of the Big Three of Djokovic, Rafa Nadal and Roger Federer, who have combined to win each of the last 11 Grand Slams, from winning in New York. Medvedev, who is still four wins away from a maiden Grand Slam title, welcomed the post-match boos and waved for more before addressing the crowd in what was certainly the most bizarre moment of the US Open. "First of all I can say thank you to all you guys because your energy tonight gave me the win," Medvedev, who will face German qualifier Dominik Koepfer in the next round, said on court. "If you were not here I would probably lose the match because I was so tired, I was cramping yesterday and it was hard for me to play." Djokovic is attempting to become the first back-to-back men's champion at Flushing Meadows since Roger Federer won five titles in a row from 2004 to 2008. He will meet Wawrinka, the man who beat him in the US Open final three years ago, for a place in the last eight. "We've had some great battles over the years, all over the world and especially here," Djokovic said of his upcoming clash with the Swiss three-time Grand Slam champion.
at August 31, 2019