Hurricane Dorian’s expected landfall on Florida has Miami, Orlando, Fort Lauderdale, and Tampa scrambling to remove bikes and scooters from their streets. If the devices aren’t removed from the streets, they could potentially be picked up by hurricane winds — transforming into threats to people and property. Miami has demanded that all of these mobility companies remove their products from the streets by noon on Friday, Bloomberg reported. Tampa has not yet issued a request for removal, but if (or when) it does, the companies will have 12 hours to comply with it. (“All of our vendors appear prepared for that requirement, and are staying tuned to the weather notices,” says a spokesperson for the city of Tampa.) Lime, Uber’s scooter company Jump, and Bird say they are prepared to batten down the hatches in all the cities in which they operate. 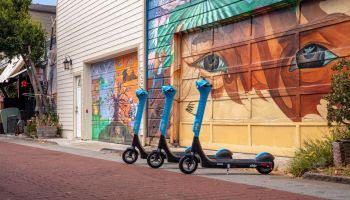 In total, Lime has about 1500 e-scooters in Miami, Fort Lauderdale and Tampa, as well as about 500 bikes in Orlando. A ground team is collecting the scooters and bikes to store them in a warehouse while the storm passes, a spokesperson said. Lime will meet Miami’s noon deadline, and plans to have its bikes removed from Orlando by mid-day Saturday. This isn’t Lime’s first hurricane; in August 2017, Lime pulled their bike fleet for Hurricane Irma. Hurricanes aren’t exactly surprising in Florida, the spokesperson noted, so the company has plans for when they occur. By contrast, this is Jump’s first rodeo. The company, which was acquired by Uber in 2018, operates 250 scooters in Miami and 300 in Tampa. Jump says it will meet Miami’s deadline, and may remove the Tampa scooters as well, depending on the storm’s expected path. Bird said only they are monitoring the conditions across Florida. Their response to the hurricane might include “pausing our service when weather does not permit safe riding, and can sometimes lead to removing Birds from the road during periods of inclement weather such as hurricanes,” a Bird spokesperson said. Lyft, Spin, and Bolt— all of which operate in Miami — didn’t respond to requests for comment. Neither did the cities of Miami, Orlando or Fort Lauderdale.
at August 30, 2019