Here’s the finalized lineup for the third Democratic debate

Democrats aren’t letting just anyone onto their presidential debate stage anymore. Just 10 candidates qualified for September’s third debate: Joe Biden, Bernie Sanders, Elizabeth Warren, Kamala Harris, Pete Buttigieg, Beto O’Rourke, Cory Booker, Amy Klobuchar, Andrew Yang, and Julián Castro. Here’s the podium lineup: The 11 other candidates in the field all failed to meet a polling requirement imposed by the Democratic National Committee by the end of the day Wednesday. For the first time, this debate will feature all the qualifying candidates together on a single night: Thursday, September 12. It’s co-sponsored by and will be aired on ABC and Univision. 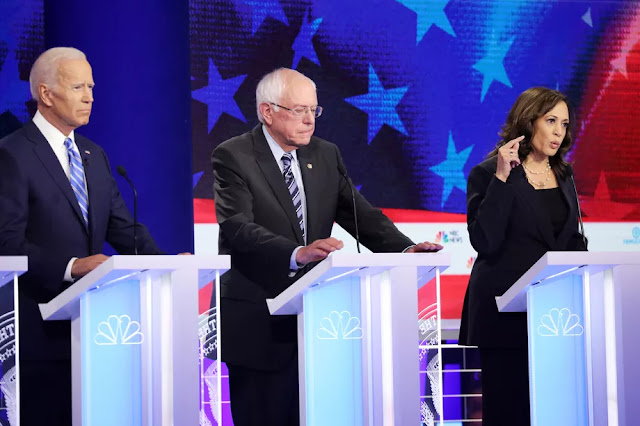 Candidates had to hit 2 percent in four recent polls from a specific list of organizations, and get donations from 130,000 people. By contrast, to get into the first debate, you had to hit 1 percent in three polls or get donations from 65,000 people — each threshold was lower, and you didn’t need to meet both of them. The polling threshold proved more challenging. Tom Steyer, Tulsi Gabbard, and Marianne Williamson all met the donor requirement. But Steyer fell one poll short, Gabbard fell two polls short, and Williamson fell three polls short. The rest of the candidates met neither requirement. The good news for those who narrowly missed out is that they’ll have another chance in October. The DNC is using the same qualification rules but extending the window to make the cut by another month or so. (So Steyer will still need just one more poll, Gabbard will need two, etc.)
at August 30, 2019