Australian Hannah Green eagled the par-five fifth hole to shoot a nine-under 63 on Friday (Aug 30) and take a five-stroke lead at 17 under after the second round of the LPGA Portland Classic. The winner of the KPMG Women's PGA Championship in June was at 127 after 36 holes at Columbia Edgewater Country Club. Kim Sei-young was joint second after a record-setting 61 in the long-running tournament. She had 11 birdies to put her at 12 under. Fellow South Korean and world No. 2 Park Sung-hyun was also at 132, a stroke up on a group that included Monday qualifier Yealimi Noh. Green's 63 was a career-low round, and it came after she opened the tournament with a first-round 64. "I just don't want to get too ahead of myself. 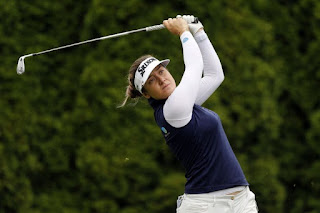 Obviously this is quite new to me, shooting such low scores back-to-back," she said. "I want to make sure I continue to do the same things and don't get too disappointed if I don't back it up with another solid round. Going to keep the same game plan." Top-ranked Ko Jin-young, who won the CP Women's Open by five shots last week, had a second-round 69 and was well back of the leaders at seven under. Defending champion Marina Alex was at nine under after the first two rounds in the 72-hole tournament that started in 1972 and is the tour's longest running non-Major event. She was asked if she has been thinking back to what she did last year. "I think I did a little bit yesterday, probably more so than I should have," the 29-year-old American said. "Now just going to try and go out and put as many birdies together as I can. I mean, I think that Hannah is playing exceptionally well right now, so there's still a lot of chase to do." Dana Finkelstein, ranked 240th, made a hole-in-one on the par-three eighth and was also at nine under.
at August 31, 2019