National kegler Cherie Tan became the first Singaporean to win gold in the Masters category of the World Bowling Women's Championships, after defeating Colombia's top-ranked bowler Maria Rodriguez in the final at the South Point Bowling Plaza in Las Vegas on Friday night (Aug 30). Tan beat Rodriguez by two games to nil, holding her nerve to win the first game 203-201, and then the second 258-217, in the best-of-three series. Rodriguez, 30,had topped the standings in the All Events two days earlier, with a total pinfall of 5,488. Tan, 31, had placed fifth with 5,376. Tan said: "I'm really, really happy to finally win the gold! Especially since I've been coming so close (2015, 2017 and 2019) and never really attained it. "I felt that I bowled well the entire tournament though I fell short in the singles and all-events. "Coming up for this world championships, the main goal of the team was to win the team gold and we fell short of that as well. 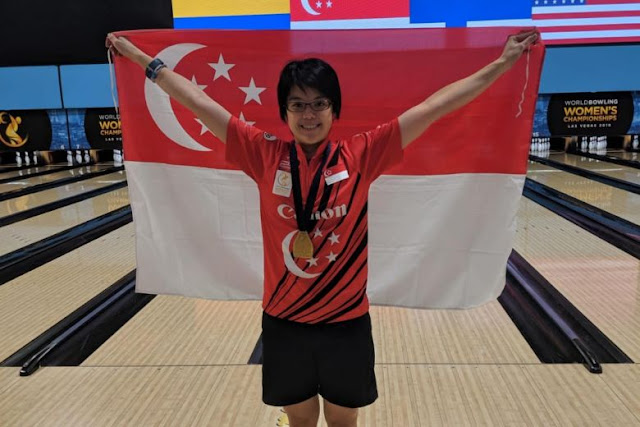 "So this medal is not only for Singapore, it's for the team." An overjoyed Jessie Phua, president of SingaporeBowling, told The Straits Times: "(Tan's achievement was) totally deserving and long overdue. Cherie is one of our most hardworking, disciplined and focused athletes at SingaporeBowling. "Her win certainly helped reaffirm and stamp our premier standing in the bowling world - a truly world-class performance that Singapore can be proud of !" Only the top 24 bowlers with the highest pinfalls in the All Events standings qualified for the Masters finals. The only other Singaporean that qualified for the Masters was Bernice Lim, who placed 23rd with 5,132 pinfalls. But she lost 2-1 (227-163, 202-225, 224-246) to Rodriguez in the third round of the Masters finals. Some 180 bowlers from 34 nations competed in this year's championships. This is Tan's second individual medal at the biennial world championships, after winning a silver medal in the singles category in Abu Dhabi in 2015. She had also won a silver in the trios and a bronze in the doubles then. The previous best performance by Singaporean bowlers in the Masters category of at the world championships were silver medals, won by Daphne Tan in Hong Kong in 2011 and Jazreel Tan in Mexico in 2007. Unlock all Premium articles and discover exclusive stories, in-depth analysis, award-winning multimedia content and more. Cancel anytime.
at August 31, 2019